On a clear evening he held forth about the so-called dangers of Chapel Hill–at that time the hub of all things liberal in the great north state. He was sure we had been told by the folks at home not to let all those radical University of North Carolina professors fill our heads with nonsense; and no doubt we had been warned about the dangers of dope smoke wafting across the green and other sensual pleasures that lie in wait for us. His point, in gently mocking the fears we imported with us, was that it was time we tried out some new ideas and new ways of thinking. That college should not be like the education we had engaged in to prepare us to get here. Rather, it was time to think broadly, to talk to people with whom we disagreed, to read authors sometimes banned at libraries back home, and to maybe, just maybe, hatch an original thought or two of our own.

Heady stuff. All presented with humor and the grace that only a 50 something balding man who looked like Santa Claus but talked like Marx (both Groucho and Karl) could pull off. I had to find a way to be in his classes.

An excerpt from a tribute to one-time UNC-Chapel Hill history professor William “Bill” Geer. Geer was a longtime Chapel Hill resident and fixture on the UNC campus. For many years Geer collected material on O. Max Gardner. His biography on the former North Carolina governor had not been completed when Geer died in 1999. Correspondents in the Washington, D.C. and Raleigh bureaus of N.C. Miscellany alerted us to the tribute to Geer. Its author is George Wood, principal of Federal Hocking High School in Stewart, Ohio, and executive director of the nonprofit Forum for Education and Democracy, a collaboration of educators from across the country. The tribute also appeared in a recent column in the Washington Post.

Yesterday’s @ncnewspapers headline, from the Charlotte News in 1911, read “Alleged Blind Tiger Seized.” For those of you unfamiliar with Prohibition-era jargon, the story was not about a sightless jungle animal: a “blind tiger” was another name for a speakeasy, or any place where untaxed liquor (often homemade) was sold.

I first ran across the term in the title of a fascinating pamphlet in the North Carolina Collection, “The Life of George L. Smith, North Carolina’s Ex-convict: Boldest and Bravest Blind Tiger Man, Who Has Run Blind Tigers in Nearly Every Town in North Carolina.” Smith was a compulsive bootlegger who was rarely able to evade the law, but despite frequent arrests he nearly always ended up back at the still.

I was curious about the use of the term “blind tiger” and looked through the North Carolina Newspapers collection for examples. The phrase was definitely in use well before Prohibition. The earliest example I could find was in the Elm City Elevator from April 4, 1902, which referred to a “blind tiger wagon” selling “liquor for sale by the keg, often very cheap.” The term appeared frequently in the Charlotte News from 1911 (North Carolina enacted statewide prohibition in 1908), as well is other papers from around the state during the same period. The latest use of it I found was 1945, in an issue of the Raeford News-Journal. 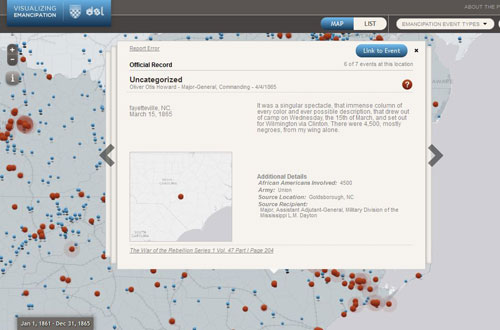 It was a singular spectacle, that immense column of every color and ever possible description, that drew out of camp on Wednesday, the 15th of March, and set out for Wilmington via Clinton. There were 4,500, mostly negroes, from my wing alone.

Major General Oliver Otis Howard to Major L.M. Dayton, Assistant Adjutant General, Military Division of the Mississippi, U.S. Army. Howard was reporting on the status of refugees who had joined with Union forces near Columbia, S.C. and were being moved from an encampment near Fayetteville.

The report is included on the website Visualizing Emancipation, produced at the University of Richmond. As the site’s creators describe it, Visualizing Emancipation “organizes documentary evidence about when, where, and how slavery fell apart during the American Civil War.” An interactive map ties the locations of “emancipation events” to excerpts describing the incidents in books, official documents, newspaper accounts, diaries and letters.