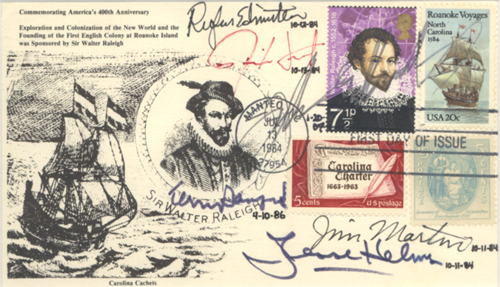 Look closely at the autographs on this first day cover and you’re sure to recognize some familiar names. Yes, that does say Jesse Helms, right alongside Terry Sanford and Jim Martin. And that’s Rufus Edmisten and Jim Hunt near the top. The scribble in the middle is John Edwards.

The cover, our April Artifact of the Month, was issued in 1984 to commemorate the 400th anniversary of the founding of the first English colony at Roanoke Island. The cachet (the artwork on the envelope) depicts an English ship next to a drawing of Sir Walter Raleigh, who sponsored the Roanoke Colony.

If you look even more closely, you’ll see that the autographs have dates spanning from 1984 to 2007. The donor of this item carried the cover with him to events and had it autographed by prominent North Carolinians when the opportunity arose. Descriptions of those events are included in the label below, which is framed with the cover.

It took more than twenty years to create, but you’d be hard-pressed to find a more purely Tar Heel artifact.