Our October Artifact of the Month serves as an important reminder: Hollywood dazzle aside, the impulse to turn a two-dimensional image into a three-dimensional experience is nothing new. 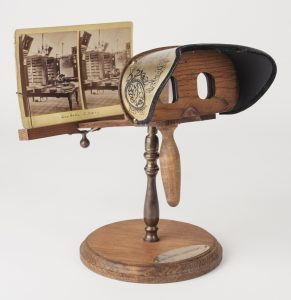 The artifact in question, a 19th-century stereoscope, comes from the collection of the NCC Photographic Archives. The stereoscope gives the illusion of depth to a side-by-side pair of flat images, which, when viewed through the device, appear as one 3D image.

This model, the Holmes Stereoscope — invented by Oliver Wendell Holmes, Sr — was the most popular stereoscope in the 19th century.

Get the 3D experience in person

In conjunction with the exhibit, Wilson Library will host the event “North Carolina Through Student Eyes,” where student recipients of the 2012 and 2013 North Carolina Documentary Photography Award will present their projects.

On this day in 1882: Presbyterian minister Joseph Wilson, father of Woodrow Wilson, laments in a letter to his son the demands of his latest flock:

“My work here in Wilmington seems to be done, and I think I see evidences amongst the people that some of them think so too. Yet I never preached so well . The fault they find with me is as to visiting. They want a gad-about gossip.”