What’s the downside to having beautiful money? Not knowing whether it’s real.

Our September Artifact of the Month is a counterfeit bank note, supposedly from the Commercial Bank of Wilmington. The bank was real, but it had nothing to do with this note.

Before the Civil War, coins were scarce and the federal government printed very little paper money. Paper money printed by banks, merchants, and local governments served as common currency. These private and local issues were typically embellished with artwork in the form of vignettes, or pictorial elements. The variety and beauty of these vignettes is the subject of the NCC Gallery’s current exhibition. 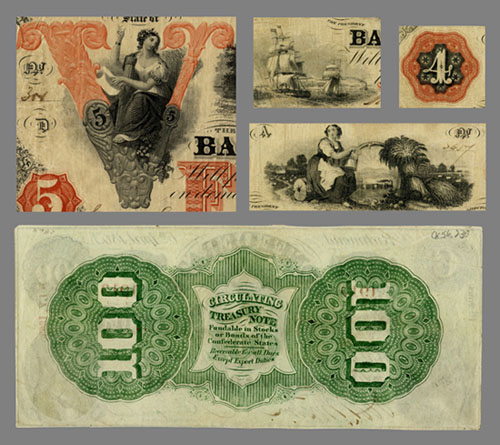 While mid-nineteenth-century printing technology did assist in deterring some counterfeiters, the wide variety of available notes presented opportunities for fraudsters.

Our featured note, with its dramatic whaling vignette, was a genuine note from a New Jersey bank. When the bank folded, its paper money became worthless. As was typical in that era, some enterprising criminal altered the note so it bore the name of the Commercial Bank of Wilmington.

Because banks issued so many different designs, this fraudulent note could be passed off easily, with its recipient none the wiser.

If you’d like to know more about the art that appeared on North Carolina money, join us in the North Carolina Collection Gallery for an open meeting of the Raleigh Coin Club on Tuesday, September 16, 2014. The meeting will include a guided tour of the exhibition hosted by its curators Bob Schreiner and Linda Jacobson.

” ‘Manteo to Murphy’ is a phrase often used in reference to the entire east-west width of North Carolina, particularly when describing a phenomenon that touches all regions of the state.

“The phrase was famously applied to the 1876 gubernatorial campaign between Zebulon B. Vance and Supreme Court Justice Thomas Settle Jr., in which Vance’s victory set off ‘rejoicing by Democrats “from Manteo to Murphy.” ‘ This followed from the fact that Vance and Settle had toured the state in a series of debates that resulted in the largest Democratic majority (over 13,000) in any election between 1868 and 1900.

“The phrase is actually a symbolic and not literal rendering of the extreme east-west width of North Carolina, since neither Manteo (Dare County) nor Murphy (Cherokee County) is situated precisely at the state’s borders.”

–– From “Manteo to Murphy” by Wiley J. Williams in NCpedia

A Nexis search of newspapers dating back to 1987 turns up 179 references to “Manteo to Murphy” — but almost twice as many (335) to “Murphy to Manteo.”

What happened? How did this historic expression come to be so often reversed? Did our habit of reading text left to right carry over to the state map? Or is it, as my wife suggests, that “Man-te-o” delivers a “stronger, more musical” ending than  “Mur-phy”?