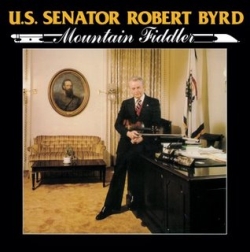 Congratulations to West Virginia Senator Robert C. Byrd, who today marks his 20,774th day in office, making him the longest-serving member of Congress in U.S. history. To fully appreciate how long Byrd has served, note that he has had time to both filibuster the Civil Rights Act of 1964 and to endorse (and, presumably, vote for) the first African-American to be elected President. He has come a long way.
Though hampered now by his age and health problems (he will be 92 years old on Friday), Byrd has been an avid country fiddler for most of his life, heavily influenced by the recordings of legendary West Virginia fiddler Clark Kessinger. In 1978, while Byrd was Senate Majority Leader, he recorded an album for County records titled U.S. Senator Robert Byrd: Mountain Fiddler (SFC # FC-13991).
Listen below to a clip from that album of Sen. Byrd, on fiddle and vocals, performing “Rye Whiskey” with Doyle Lawson on guitar, James Bailey on banjo, and Spider Gilliam on bass.
Rye Whiskey