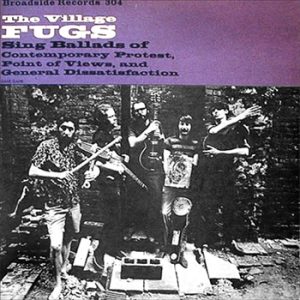 We were saddened to hear this morning that poet/musician/activist Tuli Kupferberg, one of the founding members of the folk-rock band the Fugs, died yesterday in Manhattan. He was 86 years old.
The Fugs released their first album, The Village Fugs (later reissued as The Fugs First Album), on Broadside and Folkways records in 1965. Fellow poet and founding member Ed Sanders wrote in1993,

We came to the attention of Folkways owner Moe Asch through the good efforts of legendary artist, filmmaker, and musical anthropologist Harry Smith… To float the project past Mr. Asch, Harry told him we were the Fugs Jug Band.”

While the Fugs remained largely unknown to mainstream audiences, the band had a lasting influence on popular music, introducing the explicit profanity, sexual references, and leftist politics that would later become a staple of punk rock. Kupferberg wrote many of the band’s funniest and most politically cutting songs, including “Kill for Peace” and “CIA Man” (recently featured in the soundtrack to the Coen Brothers’ movie Burn After Reading).
The SFC’s  Broadside Collection contains many unreleased solo recordings Tuli Kupferberg made for Broadside in the 1970s, including the clip below, “Take-a-this-pizza”:
take-a-this-pizza
Clip from FT-9458 in the Broadside Collection.