ly succumbed to tuberculosis on May 26, 1933, the world of country music was left without it’s founding father, and Victor records was left without one of it’s biggest stars.  If an effort to fill the void, Victor quickly signed Jimmie’s cousin, Jesse Rodgers, to their Bluebird record label. Similarities between the two were emphasized, with rumors circulating that they had grown up in the same household (they hadn’t), and that Jimmie had taught Jesse to play the guitar (he probably didn’t). Sides were recorded with distinctly Jimmie Rodgers-esque titles (“Yodeling Railroad Blues”), and Jesse even signed his early promotional photographs with Jimmie’s trademark “Yodelingly Yours,”.
But as time wore on Jesse must have found the comparisons to Jimmie constricting, or perhaps waning commercial interest in Jimmie Rodgers imitators made them less desirable. He developed his own “singing cowboy” persona, and by 1938 had dropped the “d” from his last name in an effort to further distance himself from his cousin (and likely to associate himself with that other singing cowboy, Roy Rogers).
While he never came close to being the national star Jimmie was, the singing cowboy Jesse Rogers had a successful career as a featured performer on the WLS National Barn Dance in Chicago and on WFIL’s Hayloft Hoedown in Philadelphia (where he would go on to host the children’s television show Ranger Joe). His recording career continued into the early ’60s, when emphysema forced him to retire.
Listen below to clips from two of Jesse Rodgers’ 1934 Bluebird recordings, the heavily Jimmie Rodgers-influenced “San Antonio Blues”: SanAntonioBluesclip
And the cowboy song “Old Pinto, My Pony, My Pal”:  OldPintoclip
(Both sound clips from SFC 78-828; 1946 Bourne Music Publishers song folio from the SFC Song Folios Collection.) 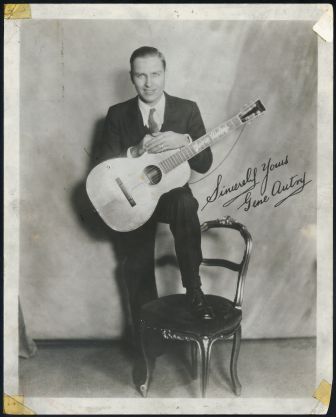 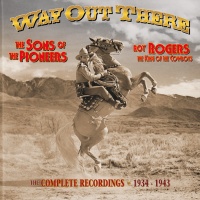