It’s another of those “1,000 word” moments, where a Morton image sends me off on a journey of discovery. On my recent visit to Grandfather, Hugh’s wife Julia told me the following story: she and Hugh got a speeding ticket in 1945 while driving through Columbus County, NC, on the way back home after their honeymoon. A few years later, Hugh was assigned to photograph the arrest of a supposed K.K.K. leader in Columbus County—Morton went to the jail, and to his surprise the man being arrested turned out to be the same man who had given them the speeding ticket. Mrs. Morton couldn’t quite recall his name, but thought it was “Early Bird” or something odd like that.
So, when I saw the negative envelope labeled “K.K.K.,” I thought to myself, maybe these are the negatives Mrs. Morton mentioned . . . and indeed, they do show a man being fingerprinted. I noted that the calendar on the wall read Whiteville, NC (in Columbus County), February 1952. 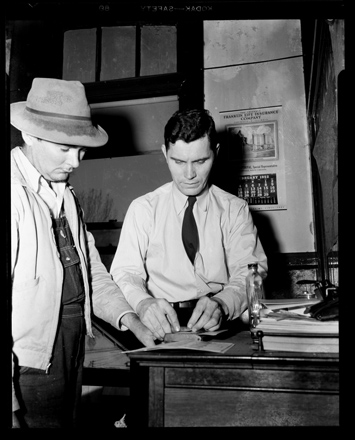 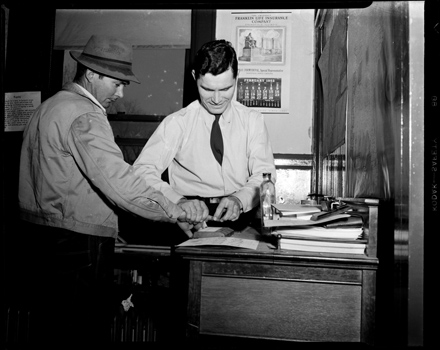 To my surprise, a quick web search for the K.K.K. in this time and place returned a bounty of fascinating information. First I learned that the 1953 Pulitzer Prize for Public Service in Journalism had gone to the Whiteville News Reporter and Tabor City Tribune, two weekly newspapers, “For their successful campaign against the Ku Klux Klan, waged on their own doorstep at the risk of economic loss and personal danger, culminating in the conviction of over one hundred Klansmen and an end to terrorism in their communities.”
Then I read about something called the Carter-Klan Documentary Project, being run right in our backyard at the UNC Center for the Study of the American South. This is an effort begun in 2003 to create a documentary film and other multimedia elements about the work of W. Horace Carter (then editor of the Tabor City Tribune) and others to combat the early 1950s Klan insurgency in Columbus County, led by Grand Dragon Thomas Hamilton. The timeline on the project’s detailed website describes the events of February 16, 1952, when “more than 35 FBI agents, working in close coordination with state and local law enforcement officials in Columbus County, N.C., arrest 10 Klansmen for the kidnapping and flogging of Ben Grainger and Dorothy Martin on October 6, 1951,” and says that several other area Klansmen were arrested from February to May of 1952.
Far down on the Thomas Hamilton page, I found a photo (below, from the Raleigh News & Observer) and description of Early Brooks, a former Fair Bluff policeman who led “the most vicious and active klavern” in Columbus County. “Eureka!,” I exclaimed to myself, a former policeman named “Early”—this has to be the guy. But when I compare the photos, I actually don’t think it is the same person. What do you think? If it’s not Early Brooks, who is it? And who is the arresting officer? 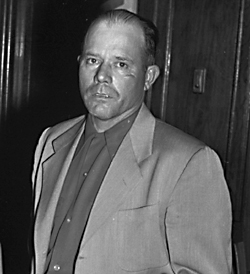 One last note about all this: in searching the UNC libraries catalog for information about W. Horace Carter, I found an oral history interview conducted with Carter in 1976 as part of the Southern Oral History Program (available online, both audio and transcript). Turns out Carter and Hugh Morton went to UNC-Chapel Hill at the same time—Carter was editor of the Daily Tar Heel in 1944, and Morton took photos for campus publications . . . surely they knew each other. Did Carter give Morton the assignment in 1952? Was the photo published? I hope someone can fill in the details.