The origin of the nickname “Tar Heel” is one that comes up often whenever North Carolinians are talking with visitors from out of state. Like many colloquialisms, a precise origin is hard to pin down as the nickname was probably used in informal conversation long before it ever appeared in print. But that doesn’t stop us from trying.

The best history of the Tar Heel nickname is William S. Powell’s “Why We’re All Called Tar Heels,” available on the North Carolina Collection website. While it’s unclear how early the term was used, we can say authoritatively that it came into regular use during the Civil War when it was applied to soldiers from North Carolina. Whether or not Robert E. Lee actually said “God bless the Tar Heel boys,” the name stuck. Powell and others cite a piece of sheet music published in Baltimore in 1866 as being likely the first printed use of the term “Tar Heel.”

Now that we have digitized versions of many early North Carolina newspapers available online, we have the opportunity to easily search thousands of pages of text — far easier than scrolling through that many pages on microfilm. Even though the optical character recognition software doesn’t do a great job of transcribing early newspapers accurately, I was able to find a couple of uses of “Tar Heel” prior to 1866.

The earliest one I came across was an ad in the Fayetteville Observer published on March 27, 1864 asking for recruits of “brave ‘Tar Heels’.” 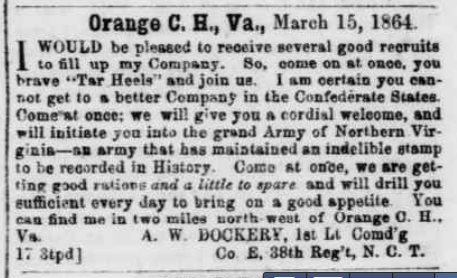 In a later issue of the same paper, published on July 21, 1864, we see that the term was in use among the soldiers themselves. One of the Cumberland Plough Boys wrote to the readers back home about conditions in camp and assured friends back home ” that ‘Tar Heels’ do not intend to be subjugated.” 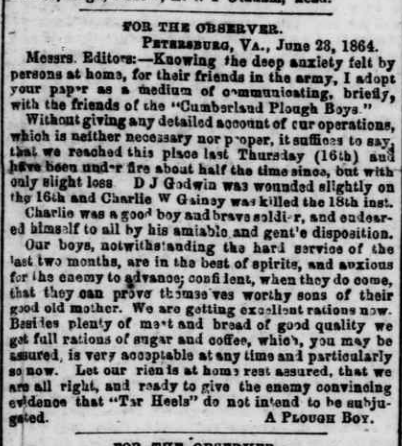 One of the most frustrating things about this kind of research using digitized newspapers is that we have no easy way of knowing what we’re missing. Because we rely on computers to do the transcription there are many mistakes, especially for older papers where there might be irregular printing or smudges or torn pages. But it is a start, and goes a long way toward making these invaluable resources more accessible and easier to use than ever.

Now if only we can figure out the origin of the term Cackalacky.

One thought on “Searching for Early Uses of “Tar Heels””