On this day in 1793: Samuel Spencer, justice of the state supreme court, dies as a result of wounds inflicted by a turkey gobbler.

Spencer was sitting on the porch of his home near Wadesboro when he became sleepy and began to nod; his bobbing red cap apparently provoked the turkey to attack. The 59-year-old judge was thrown from his chair and suffered numerous scratches, which became fatally infected.

Sunday, March 12, dawned blustery. McLendon had scheduled the game when most of Durham, including its police force, would be in church. He hadn’t told the school administration about the game; when a reporter for The Carolina Times, Durham’s black weekly, found out, he agreed not to write anything. No spectators would be allowed.

Just before 11 A.M., the Duke team piled into a couple of borrowed cars. ‘To keep from being followed, we took this winding route through town,’ Hubbell recalls. They pulled their jackets over their heads as they walked into the small brick gym.

Inside, stomachs had been churning all morning. ‘I had never played basketball against a white person before and I was a little shaky,’ Stanley says. ‘You did not know what might happen if there was a hard foul, or if a fight broke out. I kept looking over at Big Dog and Boogie to see what to do. They were both from up North.’

The game began with a sputter. Both teams botched routine plays, and shots caromed off the rims. One of the Duke players made a gorgeous pass—right into the hands of a North Carolina College player. ‘On that particular morning, you didn’t exactly need to play skins and shirts,’ Hubbell says with a laugh….

The Duke players had never seen anything like it. By the end of the game, the scoreboard told the story: Eagles 88, Visitors 44.

Then came the day’s second unlikely event. After a short break, the two teams mixed their squads and played another game, an even more egregious violation of Jim Crow. This time it was skins and shirts. ‘Just God’s children, horsing around with a basketball,’ says George Parks….

The Durham police never found out what happened. Nor did the city’s two daily newspapers, and the black reporter kept his word. No scorecard exists, and as far as official basketball recordkeeping is concerned, the game never took place.

From “The Secret Game” by Scott Ellsworth. The article appeared in the New York Times Magazine on March 31, 1996. A fuller account of the March 12, 1944 basketball game between students from North Carolina College for Negroes (now North Carolina Central University) and medical students from Duke University—an illegal game in the Jim Crow South—is now available as The Secret Game: A Wartime Story of Courage, Change, and Basketball’s Lost Triumph.

“It was not proximity to cotton fields that explains this sudden expansion of cotton manufacturing in the U.S. South [in the late 19th and early 20th centuries]….The secret of success was plentiful and cheap labor.

“The destruction of slavery and the attendant transformation of the countryside had created a large and malleable pool of low-wage workers for the cotton factories, at first mostly white rural workers, who had once been tenant farmers, and later African American workers, most of them former sharecroppers. As one contemporary observed, Southern cotton growers left the farms ‘like rats leaving a sinking ship.’

“As a result, a 1922 study by the Massachusetts Department of Labor and Industries revealed that whereas the average hourly wage of a Massachusetts mill worker was 41 cents, the going rate was 29 cents in North Carolina, 24 cents in Georgia, 23 cents in South Carolina and a mere 21 cents in Alabama.”

“[Richmond editor James J.] Kilpatrick also… used a religious argument to defend the practice of segregation. For example, Dr. L. Nelson Bell, of Asheville, North Carolina, published an article, ‘Christian Race Relations Must Be Natural Not Forced,’ in an August 1955 issue of the Southern Presbyterian Journal, which outlined the biblical argument in support of segregation.

“Bell, the father-in-law of Billy Graham, insisted that ‘there is nothing Christian or natural in manufacturing situations for forced relationships.’ Rather, Bell reasoned, real acceptance of racial equality would come only from Christians first freeing themselves of prejudice and hatred. Bell’s argument supported Kilpatrick’s assertion that change would have to come from the bottom up, not the top down.”

— From Indicted South: Public Criticism, Southern Inferiority, and the Politics of Whiteness by Angie Maxwell (2014)

Today the Girl Scouts turns 103!  We are saying Happy Birthday the most appetizing way we know how. 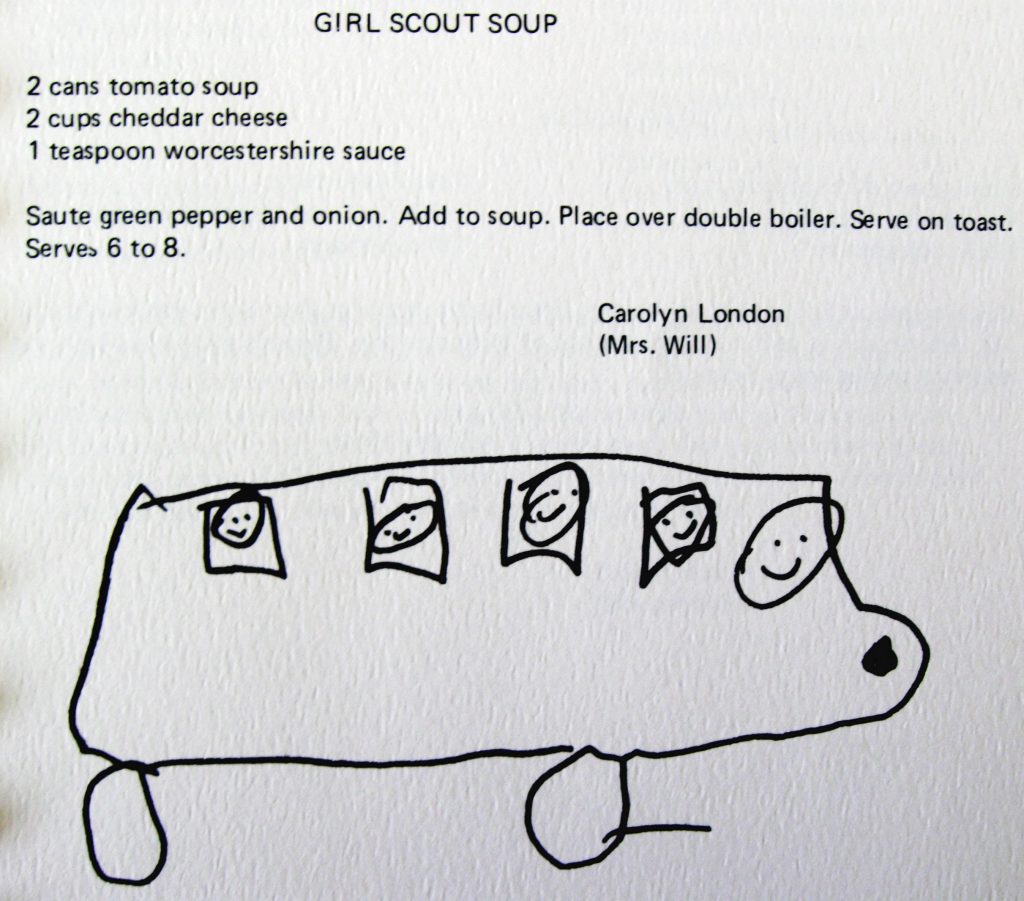 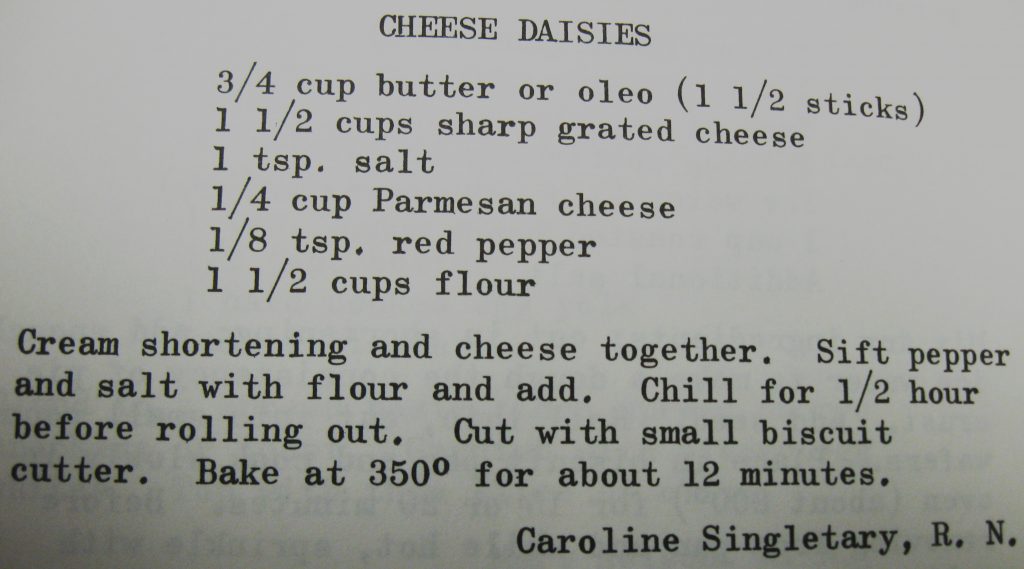 Cheese Daisies from Nightingales in the kitchen. 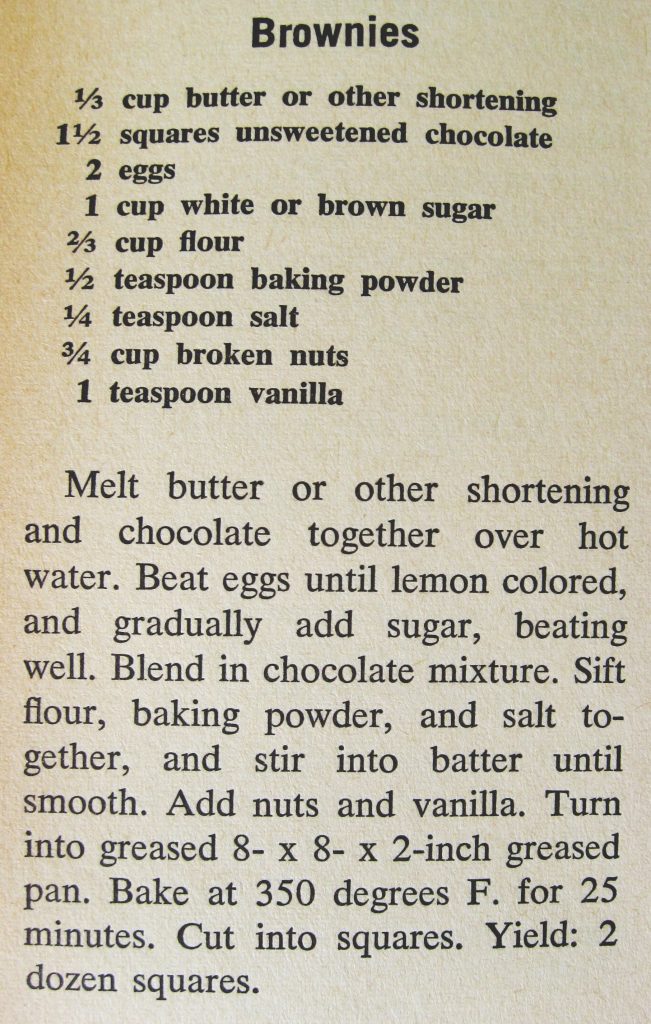 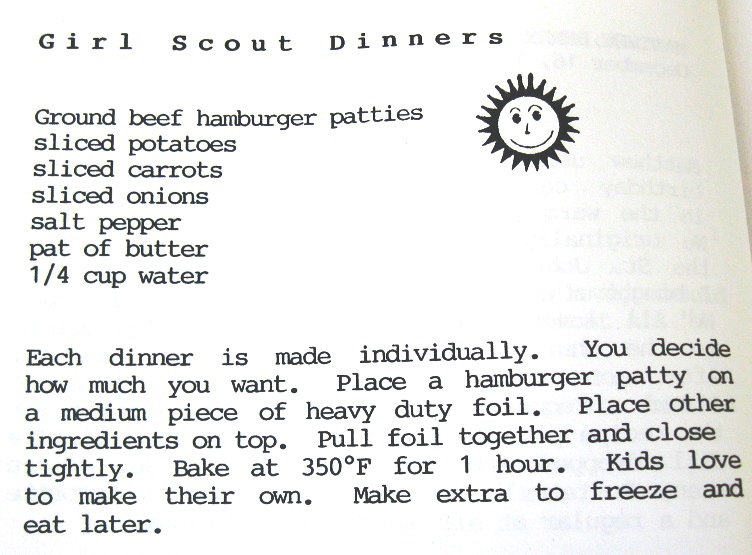 Girl Scout Dinners from Slices of sunlight : a cookbook of memories : remembrances of the children we held.

Later the same day, however, a slide at the tunnel kills 21 laborers. (In all, some 400 workers, most of them misdemeanor convicts, will die in bringing the railroad through the mountains to Asheville.)

“….For [Rhiannon Giddens, a founder of the Carolina Chocolate Drops] it was never so much about race as it was about place. ‘I’m a mixed-race person,’ she says, ‘so I grew up exploring…. I knew there was Indian in the family, so I joined [a drumming group] in high school and explored that side of it.

” ‘And you know, none of it felt quite right. Where I found my identity was when I realized that I’m from North Carolina. It’s not so much that I’m black or I’m white or I’m Indian or whatever. I’m Southern. And furthermore I’m a North Carolinian…. And it kind of eclipses the race stuff. It’s like this is who I am, this is where I come from….’ ”

— From “Patsy Cline, Allison Krauss, and Now…Rhiannon Giddens” by Malcolm Jones at the Daily Beast (March 8)

“Duke was a case of loathe at first sight for me — Middle Gothic in celophane; gigantic, turreted, battlemented entrances with pneumatic hinged swinging doors in place of iron portcullisses — innumerable chimneys — all dummies — there being a central heating plant; concrete gargoyles, great ivy vines, clamped on with tin. Cloistered picture show. Replica of Westminster, with elevator in tower. Leaded windows in library that let in no light….

“Chapel Hill is lovely & has all but restored my customary serenity & faith in capitalism. I love the place and want to live here. It is an Oxford planted on more fertile soil than Methodism, & unraped by Coca Cola [Emory University] or Chesterfield [Duke]….”

Rainey and Woodward had been friends since attending Emory together. Rainey was embarking on 42 years of teaching English at Georgia Tech. Woodward, then researching Georgia populist Tom Watson, would receive a PhD in history from UNC in 1937.

On this day in 1935: Once again assailing the Roosevelt administration on the floor of the Senate, rogue populist Huey Long of Louisiana points toward New Deal supporter Josiah Bailey of North Carolina. About the existence of poverty, Long asks rhetorically, “You will take my word for it, won’t you?” Bailey stands and, as gasps echo from the galleries, replies that “I am utterly unwilling to take your word for that or anything else!” In the ensuing exchange, Long threatens to campaign against Bailey’s reelection, and Bailey suggests that Long’s interference in N.C. politics would be met with tar and feathers.

Remarkably, the two will remain friends. Long often drops by Bailey’s Mayflower Hotel apartment for drinks, and Bailey invites Long on fishing trips from Morehead City. On one such expedition Long, expounding his plans to become dictator-president, supposedly says his first move would be to have Bailey shot. Bailey is amused, but confides later that he thought Long had been perfectly serious. Long himself is assassinated on Sept. 8, 1935.