The Southern Folklife Collection is currently cataloging a large donation of reissue CDs that feature Austrian and German cabaret singers from the World War II era and after. Though most of the songs on these albums were written by German composers, there are a few American jazz standards and folk songs that receive the cabaret treatment—”Sweet Georgia Brown” for example, seems to have been a favorite among many female vocalists. 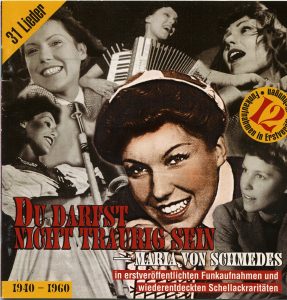 Another noteworthy example is the 1957 recording of “Oh Susanna” by Austrian singer and actress Maria von Schmedes (1917-2003). The sample below comes from the compilation album with a fantastic title Du darfst nicht traurig sein: die besten Schellackplatten und Funkaufnahmen – in Erstveröffentlichungen – von Maria von Schmedes, 1940-1960, (translation, “You must not be sad”) now cataloged and ready for patrons (CD-9676).
Maria von Schmedes, “Oh Susanna,” 1957