We at the SFC were very sad to hear the news of Loretta Lynn’s death on October 4th.

A statement from the family of Loretta Lynn.

"Our precious mom, Loretta Lynn, passed away peacefully this morning, October 4th, in her sleep at home at her beloved ranch in Hurricane Mills.” The family of Loretta Lynn.

To celebrate and remember the Queen of Country we wanted to highlight some items throughout the Southern Folklife Collection.

You can revisit Aaron Smithers’ post from 2013, featuring excerpts from an interview Lynn gave to Jack Bernhardt in 2001, which is part of the Jack Bernhardt Papers Collection (#20061).

The SFC holds a number of items related to Loretta Lynn so, in memory, here is a sampling of some of the photographs throughout our collection.

And for something a little different, who could forget her visit to Sesame Street for this moving duet with Count.

Rest in peace to the Coal Miner’s Daughter. 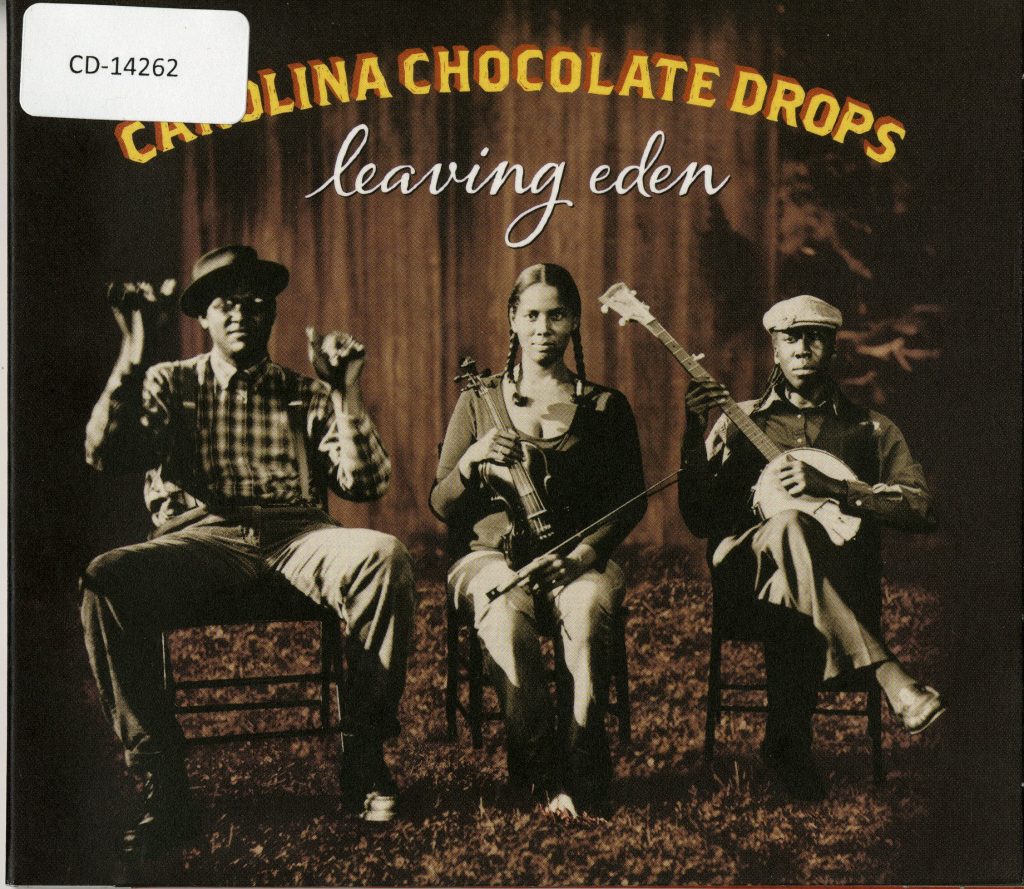 Last year, while writing a final research paper on the Carolina Chocolate Drops’ wonderful 2012 album, Leaving Eden, I encountered the music of the late hillbilly performer Cousin Emmy. The Carolina Chocolate Drops had covered her single “Ruby” for the album, notably adding a beat boxer for their arrangement. I loved the song, and the difficulty of finding anything beyond variations on the same basic biography of Emmy was intriguing. Besides wondering how her actual childhood and life compared to the brief anecdotes I found mentioned constantly, I came upon a more simple question: what was her real name?
In theory, the answer was as simple as the question: several credible sources mentioned Cynthia May Carver as Cousin Emmy’s real name. However, the 1946 Decca single that featured “Ruby” credited the songwriter as one “Joy May Creasy.” When the Osborne Brothers had their first hit on MGM Records in 1956 with their rendition of “Ruby Are You Mad,” the song was simply credited to Cousin Emmy, suggesting that Joy May Creasy and Cousin Emmy were one and the same. This seemed to be further confirmed by an oft-cited 1943 Time magazine profile that claims Cousin Emmy was christened Joy May Creasy outside Lamb, Kentucky. After searching pictures of gravestones, countless liner note mentions, copyright renewals, and census records, I had found many more instances of both names, including some minor variations (Mae instead of May, Jo rather than Joy, etc.). I felt that I could safely conclude that both these names held some truth, and the variation in reporting was probably due to a failed (and unmentioned) marriage, the use of pet names, and/or some other unknown factor. 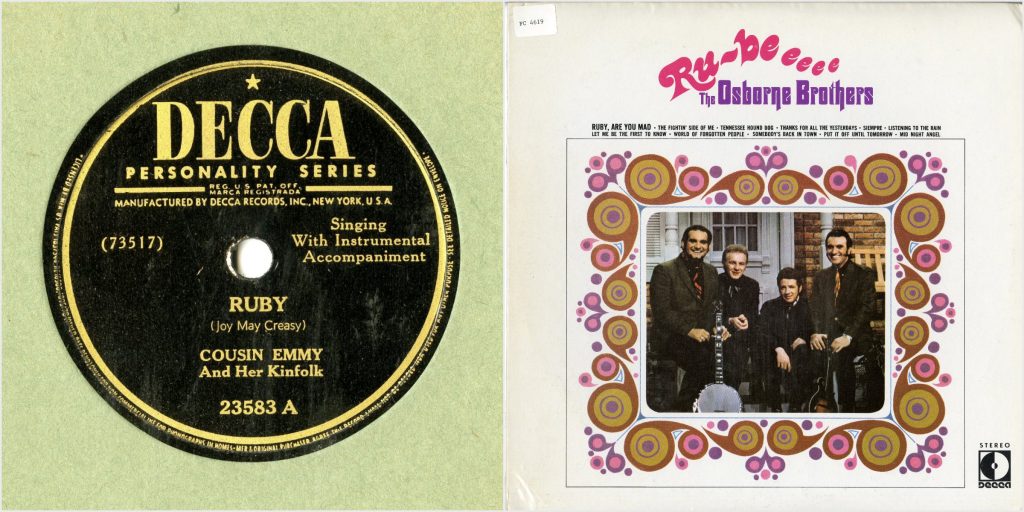 This summer, I was fortunate to begin working here in the Southern Folklife Collection, where I have been exposed to a wealth of information on early hillbilly performers like Cousin Emmy. As I pulled items for researcher questions and digitization, I began to revisit Cousin Emmy and to try to add some more context to her story. I settled on a simple goal: find a resource that mentioned both Joy May Creasy and Cynthia May Carver, or at least something that explained the difference.
In the SFC Song Folio Collection (30006), I found Chimney Corner Songs, FL-0137, which offered an interesting biography of Cousin Emmy and her fellow performers. Although it did not specifically mention her real name or a marriage, it led me to two different, illustrative sources in the Special Collections and Archives at Berea College. First, I searched a similar songbook collection and found a songbook that includes a biography for Johnny Creasy, the announcer on Cousin Emmy’s show, that also mentions his attraction to Cousin Emmy. Chimney Corner Songs was published and largely credited to John Lair, whose papers and correspondence are held at Berea. In that correspondence is a 1941 letter from Cousin Emmy, in which she champions herself and her husband, an announcer: “My husband is a very good announcer. We both work nice together.” 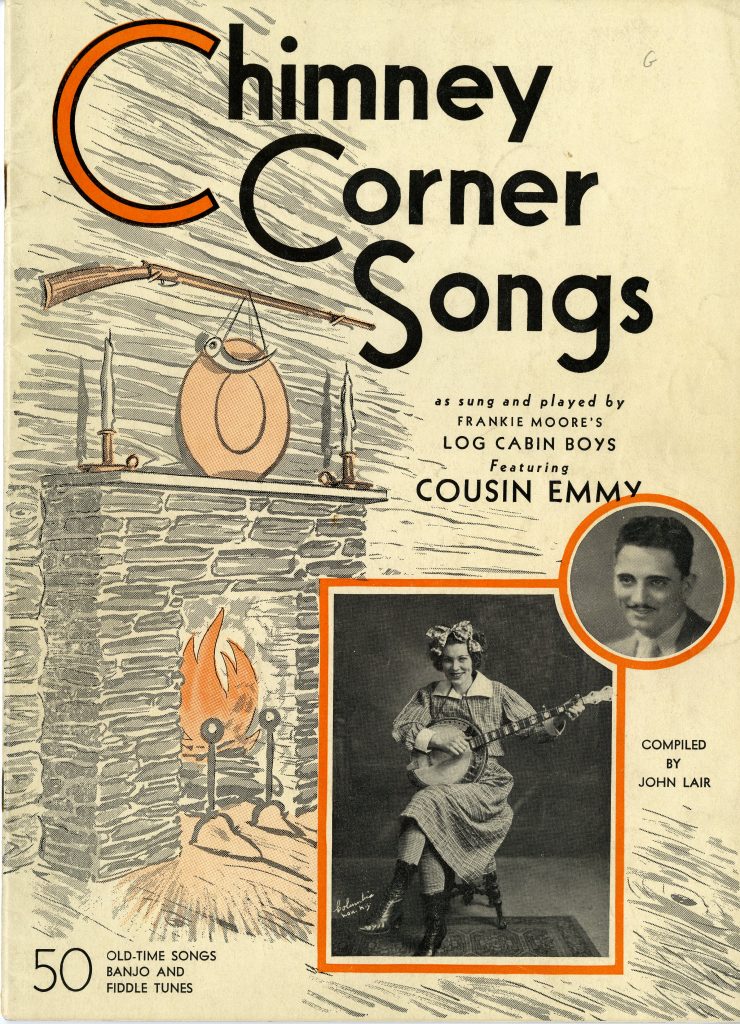 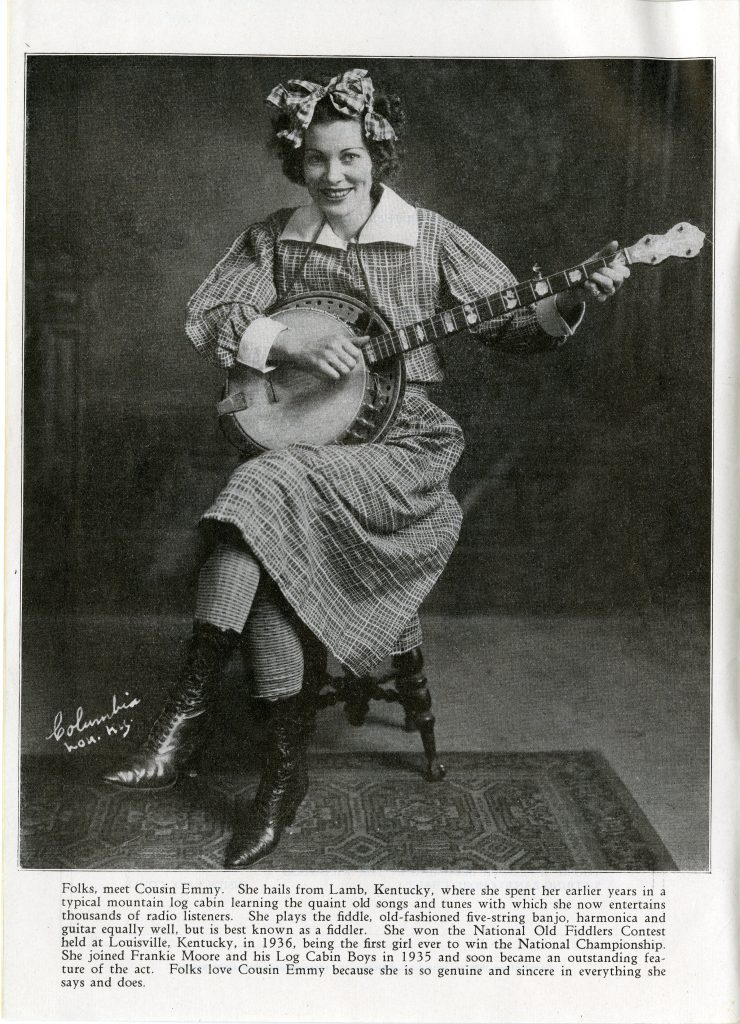 So, Cousin Emmy was born Cynthia May Carver outside Lamb, Kentucky. At least at some point, she also went by Joy. She was married to a Johnny Creasy (whose first name might have been Alfred) for some time, despite many claims, including in the Time article, that she had never married.
Of course, I also found a scribbled note card in the SFC Artist Name File (30005) for Cousin Emmy, NF-538, that states “Cousin Emmy was married to Joe Fred White before she was in radio (He’s in Florida).” In the Entertainment Industry Magazine Archive, an online database, I found a small blurb in a 1949 issue of Variety magazine:
“St. L.’s ‘Cousin Emmy’ Divorced
St. Louis, June 14
Elmer Schaller, farmer living at Lenzburg, Ill., near here, last week won an uncontested divorce from his wife, who has been the “Cousin Emmy” of KMOX’s early a.m. hillbilly program. Couple was married April, 1945, and separated March, 1948. Mrs. Schaller has been a radio entertainer for seven years.” 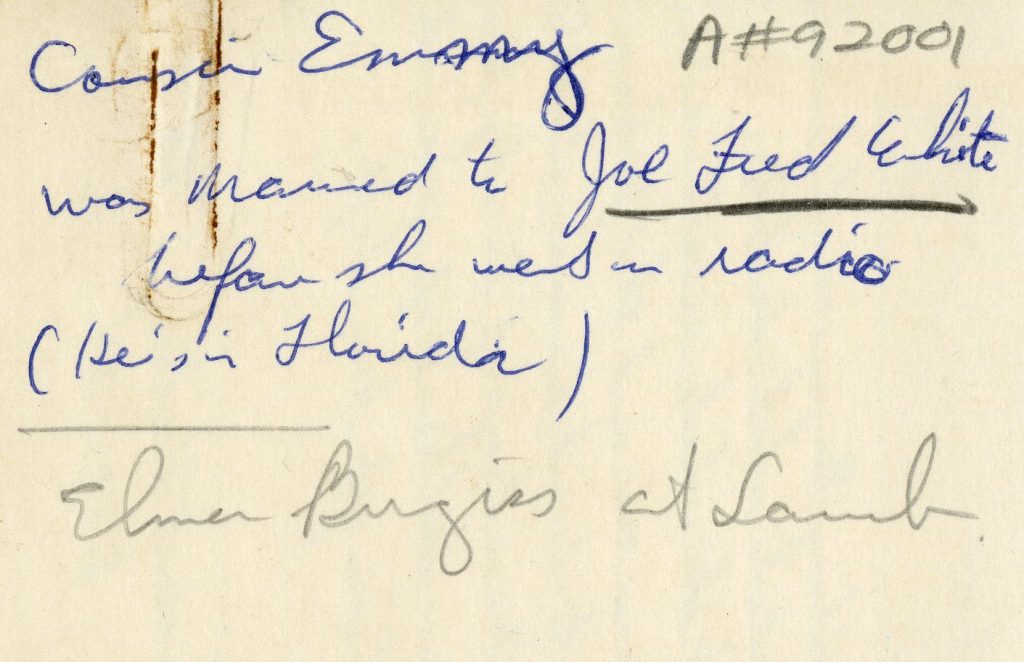 Cousin Emmy’s on-stage persona and biographical information were constantly being tailored to her audience, from hillbilly music on the radio to the folk revival with Alan Lomax in the 1940s and the New Lost City Ramblers in the 1960s. Separating all the details of her life from the stories spinning all around her would surely be an impossible task, but I plan on putting on “Ruby” and digging around a little more. 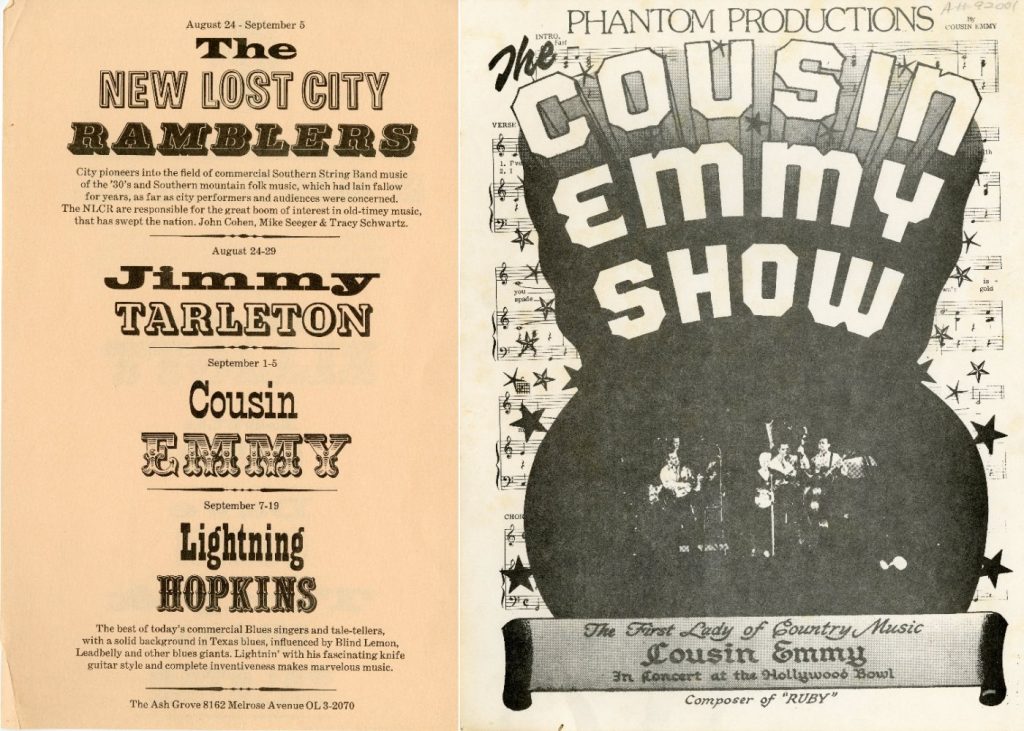 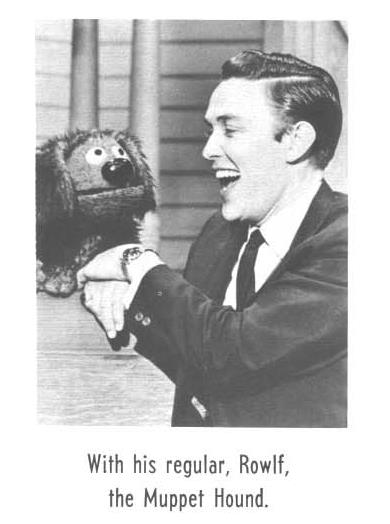 We were saddened to learn of the passing of Jimmy Dean, the country singer behind the 1961 hit “Big Bad John” and host of the long-running country music showcase The Jimmy Dean Show (he’s pictured here with the show’s frequent guest muppet, Rowlf).

Jimmy Dean was perhaps best known to this generation as a sausage magnate, and it’s clear from this October 7, 1957 Columbia Records press bio that, even before he entered the sausage business, breakfast had always been a central element of his persona:

Possibly the earliest riser in Arlington, Virginia these mornings is a tall, lanky ex-Texan who gets up at 3:30 a.m, makes his own breakfast (a goulash involving a pint of cream, two eggs, some sugar and a dash of vanilla) and rides off to CBS’ Broadcast House Studios in Washington, D.C. to do “The Jimmy Dean Show”. The early riser — and high-rated star — is Jimmy Dean himself.” 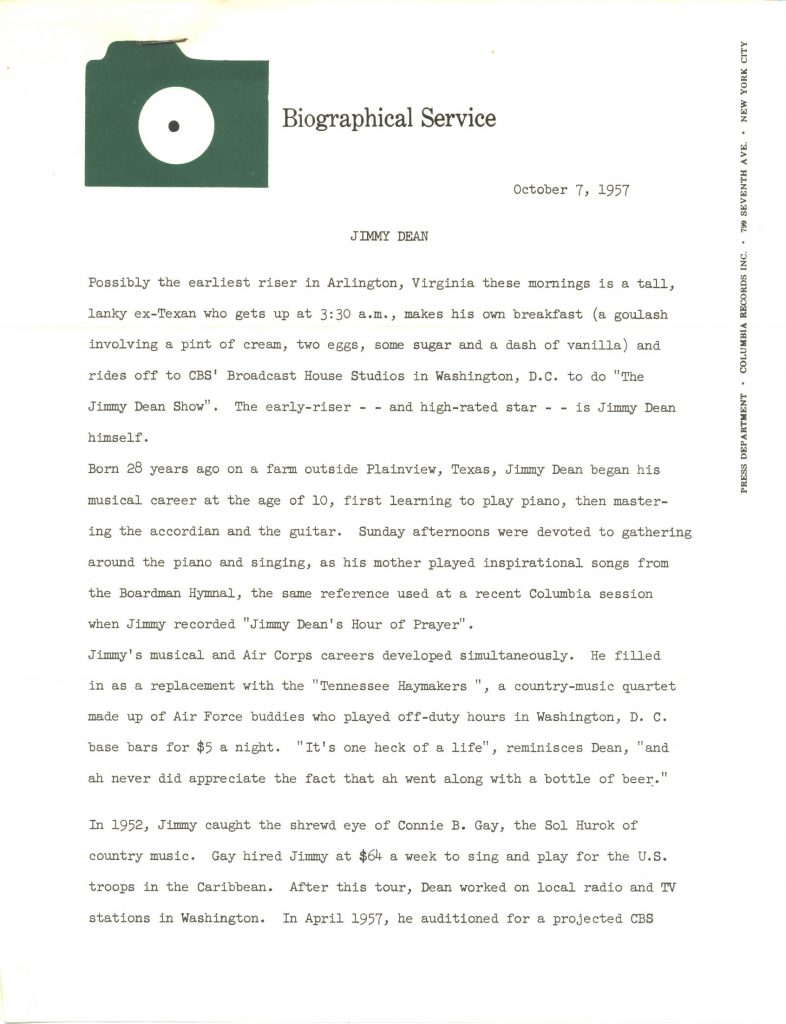 Goebel Reeves, the Depression-era singer-songwriter better known as “The Texas Drifter”, penned plenty of songs about the hobo life, including his friend Jimmie Rodgers’ hit “Hobo’s Lullaby”. While Reeves certainly crafted his share of songs about the lonely freedom that was the human hobo’s lot in life, he had a soft spot for his four-legged friends, as well.
Reeves wrote at least four songs about dogs, including the heartstring-tugging “The Drifter’s Pup” and “I Love My Dog”. Reeves didn’t shy away from portraying the darker side of canine life, either, as is evident from titles like “The Poisoned Dog”, found on an undated radio transcription disc, and the chilling account of “A Dog for Outer Space”, reproduced here: 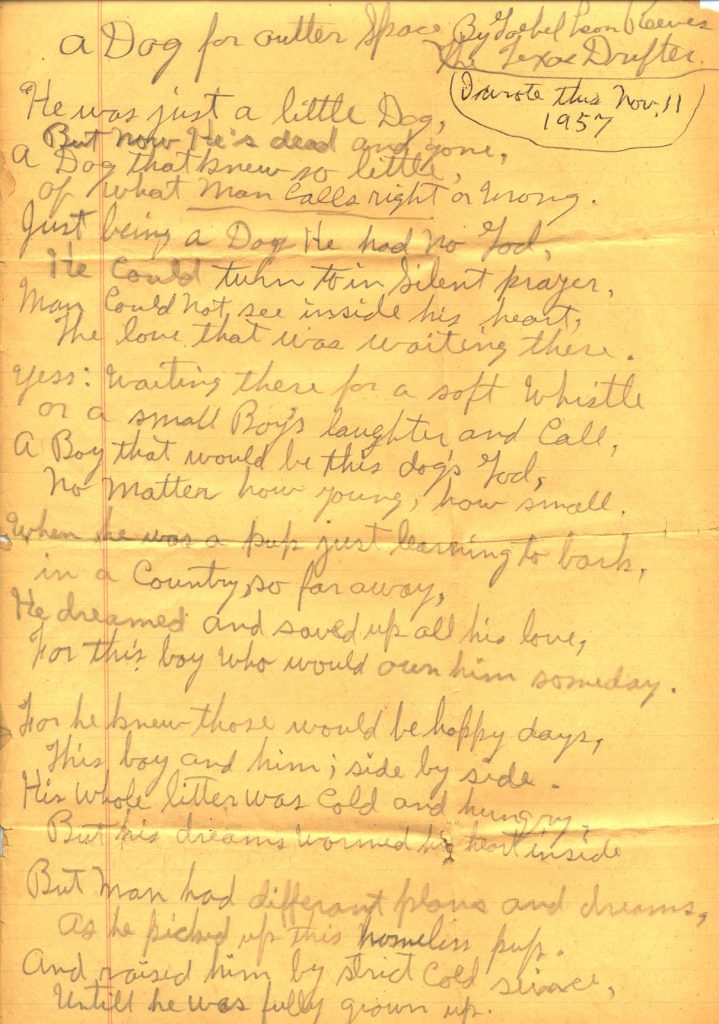 Laika the cosmonaut dog was launched into space on Nov. 3, 1957. These lyrics were included in a letter sent to Australian record collector John Edwards  on December 10th of that year, and can now be found in the Southern Folklife Collection Artist Name File Collection.

America is suffering a relapse of Beatlemania today, owing to the simultaneous  release of a Beatles-themed video game and the latest (and presumably final) CD reissues of the original albums. As you are no doubt aware, the Beatles still consistently show up in surveys as one of the most popular bands in America, 40 years after they made their last record. This 1965 pamphlet, found in the SFC’s Artist Name Files, may help explain the secret to their success:

The communists, through their scientists, educators and entertainers, have contrived an elaborate, calculating and scientific technique directed at rendering a generation of American youth useless through nerve-jamming, mental deterioration and retardation.”