This is the third post on the story behind John F. Kennedy’s campaign visit to the Tar Heel State in September 1960, drawn from newspaper accounts and the book Triumph of Good Will, John Drescher’s account of the gubernatorial contest between Terry Sanford and I. Beverly Lake that preceded Kennedy’s visit. There’s an interesting story that photographs by Hugh Morton and other photographers in the North Carolina Collection Photographic Archives can help tell. In light of the silver anniversary of that momentous campaign, and during the anniversary month of Kennedy’s assassination, I’ll be contributing a series of posts touching on that pivotal time in North Carolina and the nation. 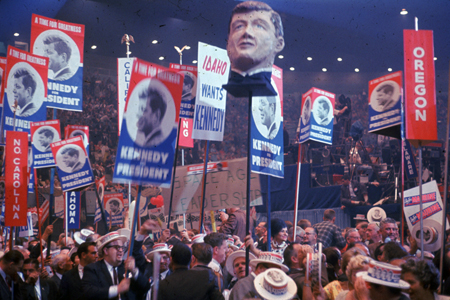 Sanford’s decision was a bombshell, and the reaction in North Carolina was explosive. Sanford made his decision while vacationing in Myrtle Beach after his run-off victory over I. Beverly Lake. When Sanford informed Robert Kennedy of his decision, John Kennedy was thrilled and he wanted Sanford to make one of the nominating speeches at the Democratic National Convention (DNC). Sanford, mindful of that his decision would not be popular with many North Carolinians, was reluctant. “Don’t do me any favors,” Sanford told Robert Kennedy. “He really needs you,” Robert Kennedy told Sanford. At the wishes of the Kennedy campaign, Sanford delayed announcing his decision until the Saturday before the DNC in Los Angeles in order to supply a boost to the Kennedy campaign going into the convention. Sanford also agreed to deliver a nomination speech, as seen below (photograph cropped by author). 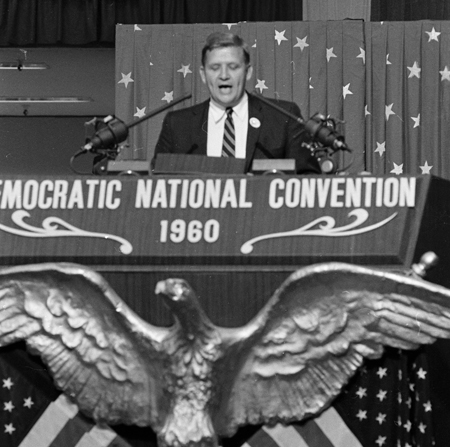 Fifty-four North Carolina delegates cast their votes for Johnson; by comparison, only eleven Tar Heel delegates sided with Sanford to back Kennedy. North Carolina’s most prominent delegates were Lyndon B. Johnson supporters, including incumbent governor Luther Hodges (who had his sights on the vice presidential nomination) and United States Senator Sam Ervin Jr., seen below holding the Wednesday, July 13th night edition of the Los Angeles Herald Express.  In contrast to the larger headline stating Kennedy was slipping, a smaller headline above the two photographs reads, “‘Solid South’ is Wavering.” 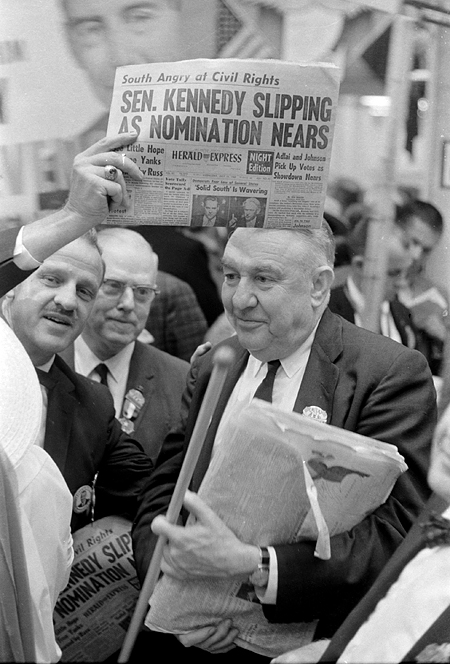 How daring was Sanford’s decision? Sanford’s support of Kennedy was an important symbolic victory for Kennedy because Sanford was a southerner willing to support a presidential candidate from outside the south. Sanford broke what most thought would be a solid bloc of southern support for Johnson. But Sanford’s decision may have been even more critical facing his upcoming race for the governorship. Back home the response was often vitriolic, so much so that Sanford and his fellow North Carolina Kennedy delegates came to be dubbed the “Dirty Dozen.”

2 thoughts on “A Spark of Greatness, part 3”