“For a century after losing the Civil War, the South was America’s own colonial backwater — ‘not quite a nation within a nation, but the next thing to it,’ W.J. Cash wrote in his classic 1941 study, ‘The Mind of the South’….

“Cash has this description of ‘the South at its best’: ‘proud, brave, honorable by its lights, courteous, personally generous, loyal.’ These remain qualities that the rest of the country needs and often  calls on. The South’s vices — ‘violence, intolerance, aversion and suspicion toward new ideas’ — grow particularly acute during periods when it it is marginalized and left behind. An estrangement between the South and the rest of the country would bring out the worst in both — dangerous insularity in the first, smug self-deception in the second.”

Our January Artifact of the Month follows in the tobacco-tinged footsteps of last month’s Artifact, although this one is quite a bit older and, one might argue, a little easier on the eyes than the Joe Camel holiday lighter. 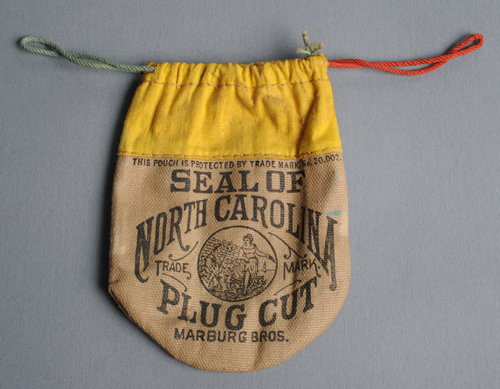 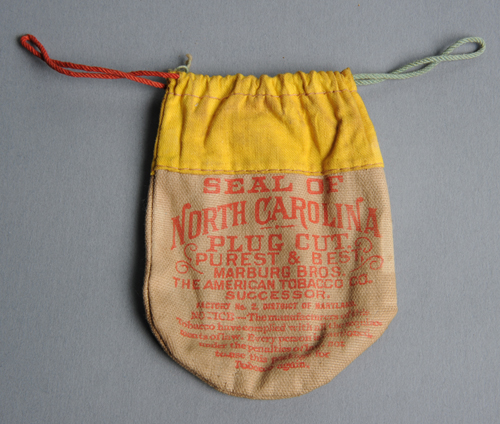 This tobacco pouch once held Seal of North Carolina Plug Cut tobacco, a product of the Marburg Brothers company. The pouch came to us via a collection of materials donated to the Southern Historical Collection from a descendant of Wylie Becton Fort (1841-1926), a landowner from Wayne County who attended UNC before enlisting in the Confederate Navy. The collection consists mostly of manuscript materials related to Mr. Fort and his family. The tobacco pouch will be housed in the NCC Gallery to ensure its preservation according to museum standards.

If you’ve never seen a tobacco pouch before, you’ve probably correctly surmised that it was simply a pouch for carrying tobacco. But you may not know that sewing the drawstrings into these pouches was once a popular way for people — often women — in the South to earn extra income. If you’re curious, you can see letters and photos related to tobacco bag stringing in this online exhibit.

The advertising strategy of Seal of North Carolina Plug Cut Tobacco focused on associating the brand with the state of North Carolina, a state known for its superior tobacco. A great example can be found via this cigarette card, shared by Flickr user Harvey&Marie, which boasts of “old North Carolina leaf”: 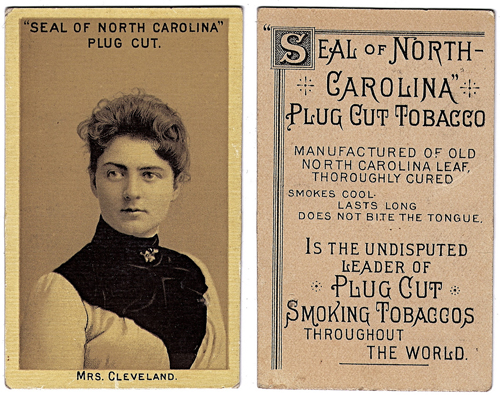 It’s worth noting that the phrase “smokes cool” appears in the advertising language used for this tobacco, prefiguring the “smooth” and “cool” themes that featured so heavily in the Joe Camel ad campaign. Of course, “cool” had a different shade of meaning back in Mrs. Cleveland’s day.

We’re grateful to the donor for sharing this tobacco pouch; a seemingly empty bag that holds a good bit of history.

Loyal blog readers and sundry others know that the North Carolina Collection collects political ephemera, including those annoying post cards and letters that fill our mailboxes in election season. During the 2008 presidential election cycle, friends of the Collection sent us more than 700 pieces of campaign ephemera. During the 2012 campaign season we received approximately 1,400 pieces. Thank you! The collection doesn’t span Murphy to Manteo, but it is darn close—Yancey County to Manteo, and points in between: Carrboro, Cary, Elizabeth City, Fayetteville, Gastonia, High Point, Mayodan, Mebane, and Wilmington, to name a few.

We’ll organize these postcards and flyers by office being contested and have them ready for researchers this spring. In the meantime, I’d like to share some observations—and a few sample images—with you. Watch for postings on Wednesday and Friday of this week, and on Inauguration Day. Please keep in mind this selection is subjective in the extreme. These are items that caught my eye based on the image, or how an issue was framed, or the humor. Don’t read politics into my choices. This is more a popular culture exercise than a political one.