Sorting through some of the late Noel Yancey’s terrific “As I Recall It” columns in the Spectator weekly, I happened onto this passage in a recap of the Dare Stones episode (Miscellany, Aug. 19):

“In 1973, Brenau [College] sought to give the stones to the state of North Carolina. Dr. H. G. Jones, then director of Archives and History [was asked] ‘if your department would be interested in having them, or if there is a museum in conjunction with the Lost Colony which would find these stones of interest’…

“Jones wrote the superintendent of the Fort Raleigh Historic Site suggesting that the stones would make  an interesting exhibit and that both he and William S. Powell felt  that ‘even though the stones appear to be apocryphal, they might well be preserved to illustrate the nuances of history.’  However, the Brenau offer fell though…”

Might it be time to reconsider repatriating the Dare Stones? The very dubiousness of their origin continues to intrigue. As Yancey quoted Paul Green: “If it is a fraud, it is a magnificent fraud. Whoever did it, they should build a monument to him.”

I graduated from UNC way back in the last century, but I still remember the commencement ceremony. Frisbees, beach balls, running and sliding on the football field, “Hi Mom” signs, etc. etc. I think that there was a speech (actually, I know that there was—I’m pretty sure that I was the only person paying attention), and I believe we were supposed to stay in line during the procession.

In light of that memory, I thought that the following document from UNC’s commencement in 1859 was very interesting.

Remember: “Canes must not be used in applauding the speakers.” 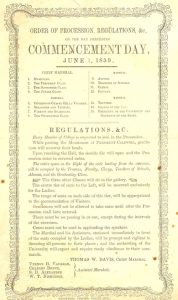