Attention NCC, NC Miscellany, NC History, and NC Postcard lovers (and those of you stumble-upon-this-website-web-friends!): while postcard transcriptions are readily available at the wonderful NC Postcards website (http://www.lib.unc.edu/dc/nc_post/), we thought we’d take their quite Droll and Merry content and attempt to fit it in, you guessed it, 140 characters! As we continue to transcribe and edit past transcriptions, us folks here at the p-card factory will tweet NC past and hope to bring a few smiles to your face in the process. Additionally, we’ll be tweeting NCC updates, interesting finds, unsolved North Carolina historical mysteries, links to innovative projects, and maybe, just maybe our staff’s states of mind. 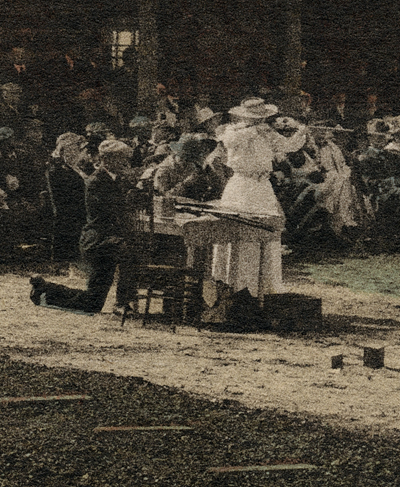 The winter resort village of Pinehurst, N.C. began in 1895, and  the Carolina hotel opened there in 1901.  It was the largest hotel in the community, and at the time of its construction, the largest hotel in the state.  Pinehurst featured several other hotels, boarding houses, and cottages for rent, but none offered the same services, amenities, and recreational opportunities as The Carolina.

One recreational activity offered by the hotel was the gun club, which enabled guests to take lessons from instructors and also featured exhibition demonstrations by the instructors.  The image above is an excerpt from a postcard depicting an event at the Gun Club,  and shows a woman in a white dress shooting a rifle.  To see the entire postcard, click on the image.

While we’re not certain, it’s possible that the woman depicted here is Annie Oakley …

After a long stint in Buffalo Bill’s Wild West traveling show, Annie Oakley and her husband, Frank Butler, came to live at The Carolina in 1915.  They had positions on the hotel’s staff, and Annie would give exhibitions and shooting lessons at the gun club, and Frank was in charge of the skeet range.  Her lessons and biweekly demonstrations were extraordinarily popular.  In the six years she worked at The Carolina, she gave lessons to hundreds of people each winter season.

This postcard dates to when she would have been employed by the hotel, and the large crowd gathered to watch (don’t miss the two boys on the roof of the club house!) suggests that this was not an event to miss.

This is the only postcard we have of the Gun Club, but you can view other postcards of The Carolina (and some of its other recreational activities) here.