The question: How large was the largest crowd ever to see a football game in North Carolina prior to 1948?

Or: How many people are in this photograph?

On 24 November 1927 Kenan Memorial Stadium, built specifically to handle the large crowds that amassed whenever the University of North Carolina Tar Heels faced the University of Virgina Cavaliers in Chapel Hill, was officially dedicated.  Among the witnesses that day was the panoramic camera of the Wootten-Moulton Studio.

The Thanksgiving Day / Homecoming Day game, won by UNC 14-13, was not the first to be played in Kenan Memorial Stadium—that debut took place against Davidson College twelve days prior.  A photograph in the student yearbook, The Yackety Yack, clearly shows empty seats.  The Virginia game, however, with its anticipated larger draw, was selected to be the stadium’s dedication day.  The photograph below depicts William Rand Kenan, Jr. and the parties of governors Angus Wilton McLean of North Carolina and Harry F. Byrd of Virginia during the game. 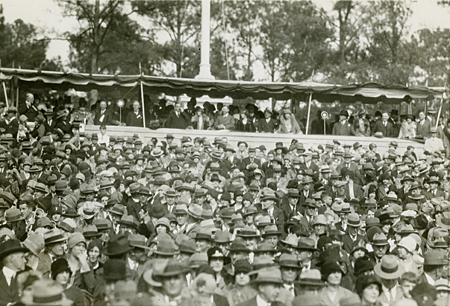 Had you been around in 1927, what was the cost of admission (if you could get a ticket)?  Well, The Alumni Review ran advertisements for advance tickets that could be purchased for $2.00, which is about $25.00 today.

Want to read more about Kenan Memorial Stadium?  Visit our sister blog, “A View to Hugh” for a post entitled “Majstic Kenan Stadium, Majestic Gem” written by Jack Hilliard for more on Memorial Stadium from the perspective of Hugh Morton’s camera.  You may also want to read an article on the history of Kenan Stadium by Lee Pace on the Tar Heel Blue website, which features a post card from the Durwood Barbour Collection of North Carolina Post Cards.  For you analog readers, an article about the dedication day game and ceremonies is in the December 1927 issue of The Alumni Review, with the title borrowed for this post.

“Perhaps none but a gifted novelist can tell what death from the 1918 flu looked like, how the stricken person appeared in those last hours of life when the horrors of the illness are fully unfurled. One of the few who attempted this was Thomas Wolfe. [While] a student at the University of North Carolina he got a telegram summoning him home immediately. His brother, Benjamin Harrison Wolfe, was ill with the flu. He tells the thinly fictionalized story in Chapter 13 of ‘Look Homeward, Angel.’

“Wolfe came home to a deathwatch. He went upstairs to the ‘gray, shaded light’ of the room where Ben lay. And he saw, ‘in that moment of searing recognition,’ that his beloved 26-year-old brother was dying…

“Nothing could be done for Ben. No one knew how to treat the flu. There was no medicine to quell the raging fevers, no way to get oxygen into sodden lungs.”

— Condensed from “Flu: The Story of the Great Influenza Pandemic of 1918 and the Search for the Virus that Caused It” by Gina Kolata (2001).

(Is there an award given for the pairing of shortest title and longest subtitle?)