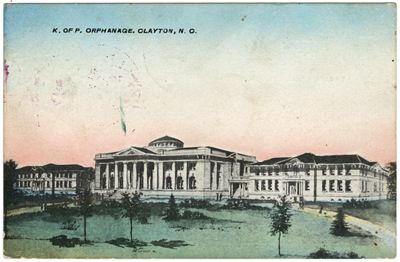 The postcard above shows the Knights of Pythias Orphanage in Clayton, NC.  It was built by North Carolina architect Henry Bonitz in 1909.

In 1893, Bonitz was part of the first graduating class from the recently opened College of Agriculture and Mechanic Arts (which would later become North Carolina State University).  As such, Bonitz was one of the first trained-in-state professional architects. Bonitz was originally from Goldsboro, NC, but his family later moved to Wilmington.  His office was located in Wilmington, and many of his projects were done in and around New Hanover County, but not exclusively.

You can read more about Bonitz’s life and work in his entry in NC Architects and Builders, an online biographical dictionary presented by NC State’s Libraries.  Make sure to catch the anecdote about what became of his architectural drawings that were done on linen!