In 1851, Raleigh Rutherford (R.R.) Haynes was born in Ferry, Rutherford County.  When he was 20 years old, he moved to Union County, South Carolina, with his younger brother to work in the cotton fields.  Two years later, around 1870, he returned to Rutherford County and invested the money he made in a general store and a sawmill.   By reinvesting his money, Haynes was able to become a wealthy landowner and successful industrialist.

One of these was Cliffside, which Haynes began work on in 1900.  It was to be a mill and company town located on the Second Broad River, like Haynes’ other mills.  In North Carolina Architecture, Catherine Bishir writes that when it was built, Cliffside was one of the last (and largest) water-powered textile mills (p. 432).

Cliffside was likely named for the extremely steep and rocky hills all over the area.  The company town was home to around 900 employees, who all lived white cottages.  The company town featured a downtown with a main street that featured many services and entertainment opportunities.

Before he died in 1917, R. R. Haynes had planned to build a community center for the mill town of Cliffside.  It was designed to have a wide variety of services and leisure activities including  a library, movie theater, gymnasium, beauty shops, banquet hall, barbershops, baths, and a cafe.  The community center was completed in 1922 and named the “R. R. Haynes Memorial Building,” in his honor.

Below are two postcards depicting the R.R. Haynes Memorial Building and two postcards of other aspects of town life in Cliffside. 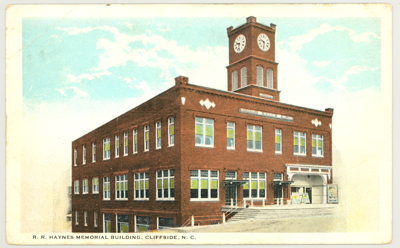 Exterior of the R. R. Haynes Memorial Building in Cliffside.  The entrance at the right is also the entrance for the movie theater.  Movie posters are visible near the entrance. 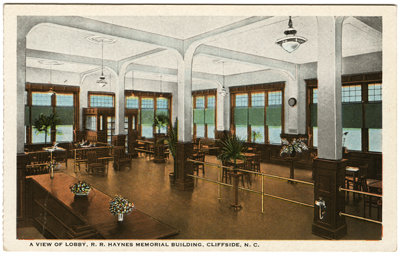 Interior view of the lobby in the Haynes Memorial Building.  Although it’s difficult to tell from the postcard, the table tops were inlaid with checker boards! 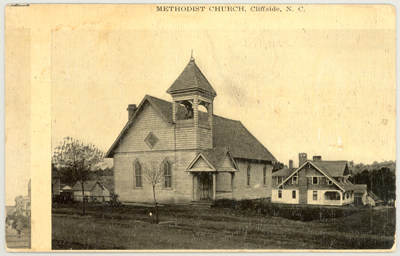 View of the Cliffside United Methodist Church, built in 1912.  A typical Cliffside house can be seen behind and to the right of the church.  Haynes built several schools and churches for the towns’ residents. 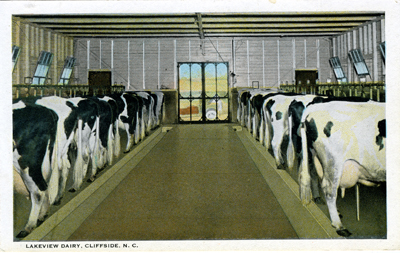 Interior view of the Lakeview Dairy farm, which provided milk for the town until the 1950s.  The dairy farm was located across from the mill.

The R. R. Haynes Memorial Building and many millworkers’ houses were torn down in the 1960s and 1970s, but the building’s  clock tower was turned into a monument and placed on Cliffside’s Main Street, where it still stands today.