This photographic postcard shows a winning stalk of Simpkins’ Prolific cotton seed, and the card’s caption mentions that it won the first place premium at the 1910 state fair.

The NCC has a run of NC State Fair premiums, rules, and regulations. I’m not sure if this cotton stalk won the Simpkins’ Prize or the Cotton Contest (or both), but in 1910, the prizes for each were as follows: 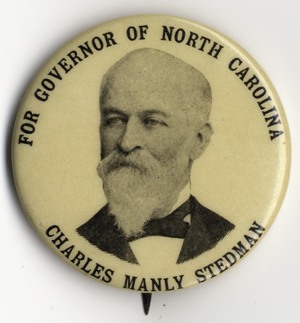 “From the end of Reconstruction until 1890, Confederate veterans held a majority of the best offices in the Southern states…. Confederate generals held 18 of the seats in the 45th Congress, 1877-1879, with 49 other seats from the South held by lower-ranking soldiers and sailors….

“The last Confederate veteran to serve in Congress was Major Charles M. Stedman of North Carolina, who died in 1930 [at age 89].”

Charles Manly Stedman was elected to the House of Representatives 10 times by his Greensboro district. This pinback must be from Stedman’s second  unsuccessful run for governor (1903), rather than his first (1888), since such celluloid political buttons weren’t introduced until the McKinley-Bryan presidential campaign of 1896. And of course he looks more like 62 years old  than 47.