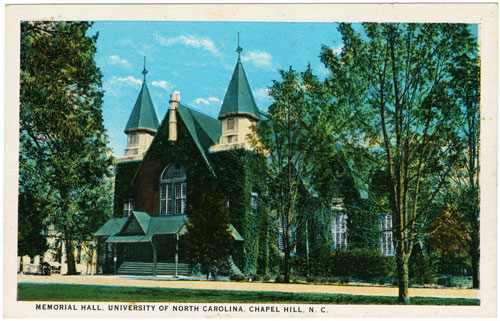 By the 1920s Memorial Hall’s interior wood trusses had decayed, leading University officials to declare the building unsafe. Its Victorian Gothic architectural style was also considered outdated. Consequently, the building was demolished in 1930 and a new one, in the Colonial Revival style, constructed in its place. The marble tablets were moved to the new building, and both the tablets and the building remain today. There’s more on Memorial Hall and other campus buildings in the North Carolina Collection Gallery’s exhibit A Dialogue Between Old & New: Notable Buildings on the UNC campus.

A total of 716 UNC alumni have died in military actions that span from the War of 1812 through Vietnam, Bosnia, the Persian Gulf, Iraq and Afghanistan. Their names are included on The Carolina Alumni Memorial in Memory of Those Lost in Military Service, which sits between Memorial and Phillips halls. The UNC General Alumni Association has created an online database with the names and biographies of the war dead.