In “preparing” for our Thanksgiving posts, I came across a sermon from the Richardson Preyer Papers given at First Presbyterian Church in Greensboro, North Carolina on Thanksgiving weekend in 1979, where Preyer appears to have been a member. Closely related materials in the collection suggest Preyer is the author of the sermon, though it is not explicitly stated. The speaker used Thanksgiving as an occasion to reflect on several notable events from the past year, and I felt they each deserved some individual attention to reflect upon. I decided to do a deeper dive into the events, and see what other materials we might have relating to them in our collections! 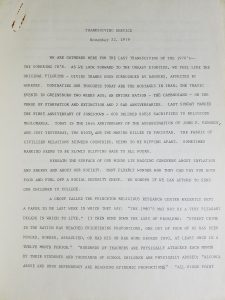 But first, who was Richard Preyer? Preyer was a lawyer, politician, and leader from Greensboro, NC. He served on various boards throughout the state for academic institutions, and earned several awards for his service. He was an “avid tennis player” and loved jazz, both playing and teaching about it. The Southern Historical Collection (SHC) has papers from both his public and private life, including materials relating to his six-terms in Congress.

So what events were mentioned in this sermon? A lot! Some events were disheartening and disturbing, others were uplifting and brought hope. For example, Pope John Paul II visited the United States for the first time in October 1979, travelling to Boston, New York, and Washington, DC. He encouraged “world leaders to sustain the human rights of people” and promoted a “strong call for weapons restrictions” in his meetings with leaders.
Now for the not so nice stuff: hostages in Iran, “tragic events in Greensboro two weeks ago,” and the first anniversary of the Jonestown Massacre. HOWEVER, you might be wondering what some of these events are! Let’s do a deeper dive into each.

Hostages in Iran
The Iranian Hostage Crisis, to which the sermon refers to as “hostages in Iran,” began on November 4, 1979. On that day, Iranian students “seized the [U.S. Embassy] and detained more than 50 Americans….as hostages,” in order to protest the United States’ “interference in its affairs” and to raise the profile of the revolution’s leader. The hostages were held for 444 days, and finally released on January 21, 1981.

Greensboro
The speaker also referred to the “tragic events in Greensboro two weeks ago,” or what came to be known as the Greensboro Massacre on November 3, 1979. On that Saturday morning, Klu Klux Klan and American Nazi Party members shot and killed five Communist Workers Party members at a “Death to the Klan” march held downtown.

The SHC contains many materials related to the event, but the following collections are some of the most prevalent. First up, the Greensboro Civil Rights Fund Records, which contain materials from the trials, videotapes of various reports on the massacre and the WTVD special on it, and books and articles on the “True Story” and the “Untold Story” of the Greensboro Massacre. Another collection which contains materials is the James Reston, Jr. Papers, which mainly consists of correspondence in 1981 referring to the Massacre, and other materials related, including chronologies of activities following the event. The final collection is the John Kenyon Chapman Papers, which has an entire series on the Communist Workers Party and the Greensboro Massacre. These materials include news articles, commemorative events materials, and video materials. There are also photographs of the 10th Anniversary of the event, and posters from the event itself including handmade posters and official flyers. 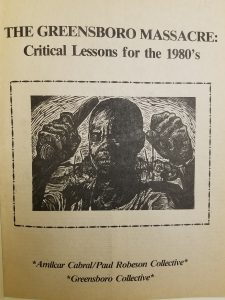 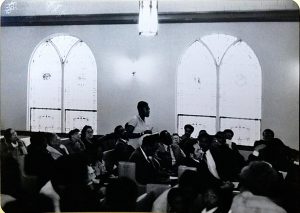 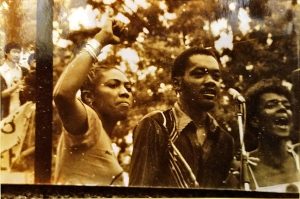 Jonestown
But what was the “first anniversary of Jonestown” event mentioned in the sermon? On November 18, 1978, led by their charismatic leader Jim Jones, 909 members of the cult religious group Peoples Temple drank poison in a “revolutionary suicide” in northwestern Guyana, South America. It represents the “largest number of American civilian casualties in a single non-natural event.” There was a wide public interest in the event, which leads us back to the James Reston, Jr. Papers. Reston became interested in writing about the tragedy, and even took a trip to Guyana to visit the site of the event. 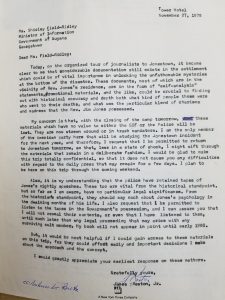 Reston ended up writing a book and play about the Jonestown tragedy; the papers we have document his research process and also include much of his correspondence regarding the event and his writings on it. An interesting letter is one he wrote to President Jimmy Carter about access to the documents, stating:

“The Jonestown affair is unprecedented in human history, and has been deeply disturbing to the American people. It cries out for serious study and explanation. In order that this may be accomplished, an official at the highest level of government, with the vision to see that no previously existing bureaucratic regulations can be relevant to such a cataclysm, will need to free up this material for scholarly access.” 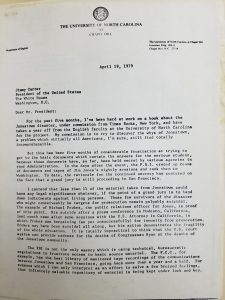 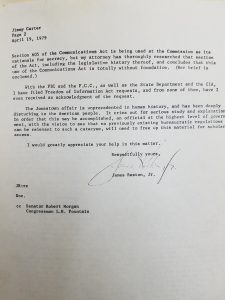 There is also various publicity and marketing materials for his documentary, entitled Father Cares: The Last of Jonestown, released in 1981, including press releases and contracts. The documentary was nominated for various awards; his collection contains the programs and press releases from these events. Reston continued to observe the anniversary of Jonestown throughout his life, writing about it in his correspondence many times.

Final Thoughts
We learn something from all the documents the SHC collects and preserves. This sermon is no different. 1979 was a year of reflection before entering the new decade; similarly, January 2018 feels like an appropriate time to reflect on the most recent decade: how far we’ve come, yet how much more work we still need to accomplish. The speaker provides inspiration in spite of the negative events of the past year, by revealing we are all human and can learn a lesson of thankfulness from the good and the bad. Come in and read the whole thing. I promise it ends on a happy and hopeful note about what is to come!